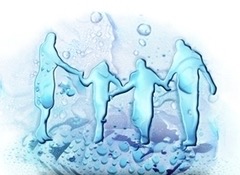 Our journey begins when we are separated from our mothers primeval water. This feeling of oneness sets us out on a journey to look for someone or something to provide that noble feeling of wholeness again. Every living organism is made up of atoms and spends its life experiencing life through the aspect of water. Water is the bond that connects all of life for we would not have no experience if it was not shared through the chemical bonding aspect that water provides. It shares the consciousness of God The Creator, the universe in existence and the experience of consciousness as life on earth. It’s the connection between the macrocosm and the microcosm sharing an experience on separate planes of existence. Science and religion was never supposed to be separated that philosophy had separated the mind from the body and because of that we lost our soul/spirituality and it caused a group of organisms to be lost and confused for there is no direction without the head, no passion without the heart and no purpose without the body.

The movement of electrons is physics, everything in the universe is based of physics. Physics precedes chemistry always but to search for who we are meant to be we must start at what we know. Chemistry is defined as a branch of science that deals with the identification of the substances of which matter is composed. Their properties and the ways in which they interact, combine and change; and the use of these processes to form new substances. It is also defined as the complex emotional or psychological interaction between two people. Because we are mostly made up of the elements that forms water the nature of the chemical structure affects our lives and through the principles of chemical bonds will explain the nature of how we bond together in our relationships to one another as well as the world around us because after all we are mostly composed of water.

Water bonds starts with the joining of two different atoms known as a covalent bond. A covalent bond forms between an oxygen atom and two different hydrogen atoms. Because the hydrogen atoms only have one electron in its valence shell it shares one electron with oxygen to complete oxygen outer orbital shell. Because of hydrogen willingness to share its electron with oxygen it makes them feel like a noble gas and creates a stable bond between them both. Sharing its charge brings the elements closer to bond, sharing is caring. Our reality is that there is a greater purpose in our life if we are willing to share the one thing we have in hopes that we may attract something much bigger. That one thing that brings us closer together to form that bond maybe ones filling of completion and creates a stable relationship based off the shared experience.

In order for the two to become one we should share something that wouldn’t cause any pain for us to do so, that way nothing is loss while everything is to be gained like a stable relationship. Now instead of being bonded to the one thing being shared you are know invested in the relationship which establishes a stronger bond. What you decide to share may mean the world to someone else and come at little expense to you. Self fulfillment is due to a stable relationship from a strong bond that everyone wants to be apart of. The purpose of the covalent bond is to attract others with the principle of sharing and with that you can build upon it and end up with a collection of other like-minded organisms that share that same philosophy. Ultimately you can end up with a positive outlook determined by the chemistry principles of the first covalent bond.

Now the oxygen has a greater number of electrons and more mass than the hydrogen atom so the gravitational pull is naturally greater which causes the hydrogen to stick to the oxygen. In the process of forming one bond another type of bond is created. Remember the phrase there is strength in numbers and in this case you can’t have one without the other. The covalent bond allows for another type of bonding relationship to occur which is called a polar covalent bond. When something is polar it has a positive and negative pole. The polar bond represents the positive and negative charge of the atom. Because the hydrogen is pulled in do to the gravitational strength of the oxygen’s need for electrons means that the hydrogen’s electron that is shared spends most of the time in the orbital shell of the oxygen. This creates a negative charge around the oxygen, leaving a slight positive charge around the hydrogen atom. The result is that the hydrogen shared its negative charge with oxygen and received a slightly charged positive outlook.

When we spend most of our time bonding to a person or a thing it can change our chemical properties changing the way people see us. An example would consist of two people hanging out all the time and one of the individuals began to inhabit some of their traits which can be positive or negative. Depending on what’s being shared determines the charge of the polarity. This effect can create either a positive or negative experience do to the strength of the polarity. That bond that pulls us in closer and changes our charge can change our life and our world. Because of the polarity being displayed will attract the kind of people/atoms that you either want or don’t want to be around. Opposites attract because an atom wants to be stable and uses the opposite charge of another atom/molecule neutralize its charge. Based on how you deal with it determines the outcome of what you will attract next.

This polar covalent bond creates the formation of the hydrogen bond which connects water molecules to each other. Now this is where it all comes together… pun intended. The molecule of water positively charged hydrogen atom forms a bond to the negatively charged oxygen atom of a different water molecule. Opposite charges attract here and is expressed through The 7 Hermetic Principles of polarity which represents the duality of mankind. In this instance we are only a few degrees apart from being connected to God, the universe, our world, society and each other. The spiritual aspect of life is water and provides that connection with us all.

There are at least two opposite poles to every person and some of us manage it well and those that do usually don’t have a problem getting along with others because the moods or personalities associated with the poles can be easily identified. When we can identify the pole expression then we know the charge to stabilize the matter. If the person knows how to relate then there’s a relationship but when the polarity is too drastic, inconsistent or unpredictable we label that as bipolar. Although we are only a few degrees apart atoms start out as neutral so its polarity can be easily identified but when a person is bipolar it’s hard to determine their mood based on the inconsistency of the polarizing behavior which may make it difficult to establish a stable connection. Balancing our polarity to a degree is apart of our daily life. Usually these polar poles are acknowledged through the extremes of good being positive and bad being negative. When people strongly display one side of the pole of polarity then they are in need of the opposite charge for stability. It’s called positive or negative reinforcement. Our pole of displays the charge that needs to be applied to neutralize the matter. When a person goes through alternating mood changes it can weaken the relationship of the bond because the pole cannot be identified. (hydrogen bonds are fairly weak bonds).

If a person was feeling really down and depressed we would feel encourage to pick them up with words of encouragement or try to inspire them to change their mood. Same goes for someone who is really up on themselves and comes off arrogant and cocky there comes a feeling to humble them. God uses the universe to teaches those lessons through what’s known as karma. Life is a balancing act between two poles and we look for someone or something to bond with that will keep us centered. When we have a bond with someone that can help us through these moments we consider them as a “real true friend”.

When the two becomes one will establish a balance or homeostasis within the mind and body and help build the bonding relationships of those around us. We are not all meant to be the same at the same time but we are all required to work together as one sound mind and body. Because molecules of water establishes its strength in numbers through the many different things it is connected to through the polar bonds that bind them makes it a universal solvent for life.

Fruit man with the seeded watermelon 🍉

The race is never over it’s only just beginning

Waternomics The System of Evolution Man vs Machine

Happy Juneteenth celebrate it with us at the Ports

If you looking for something to do this weekend fo

Yooo check this spread from the sushi god @officia

Water can physically change the landscape of every

All organisms gain information of its environment

Training the brain to do something that doesn’t

Waternomics integration of a nation

Water balances every environment whether it’s in